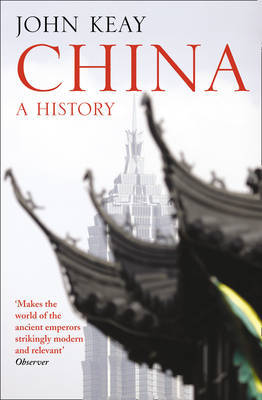 An accessible, authoritative single-volume narrative history of China, from the earliest times to the present day, designed both to engage the general reader and to challenge the horizons of the China specialist. Most histories of China appear to have been written by sinologists for sinologists. As China rejoins and perhaps comes to dominate our world order, the need for an authoritative yet engaging history is universally acknowledged. Modelled on the author's own 'India: A History', 'China: A History' is informed by a wide knowledge of the Asian context, an approach devoid of Euro-centric bias, and acclaimed narrative skills. Broadly chronological, the book presents a history of all the Chinas -- including those regions (Yunnan, Tibet, Xinjiang, Mongolia, Manchuria) that account for two thirds of the People's Republic of China land mass but which barely feature in its conventional history (which tends to concentrate on the succession of mainly north China imperial dynasties). The book also examines the many non-Chinese elements in China's history -- the impact of Buddhism, Islam and Christianity; the effects of trade; the nature of 'barbarian' invasion; the relevance of many imperial dynasties being of non-Chinese origin. Major archaeological discoveries in the last two decades afford a chance to flesh out and correct much of the written record. 'China: A History' will tell the epic story from the time of the Three Dynasties (2000-220 BC) to Chairman Mao and the current economic transformation of the country.

'There is no understanding China, present or future, without a sense of its past!Anybody fascinated by the puzzle of what comes next for our frail, perplexed planet will find unexpected answers in this crisp, often witty chronicle of amazements.' Peter Preston, Observer 'Dynasties lead to world domination: John Keay's forensic analysis of China's history makes the world of the ancient emperors strikingly modern and relevant.' Observer 'Negotiating a narrative path through this turbulent history is the unenviable task that John Keay set himself, and he has produced a valiant, fluently written attempt to condense a sprawling story into a few hundred pages.' Jonathan Wright, Independent on Sunday 'Absorbingly readable' Independent Praise for 'India: a history': 'A delight!one of the best general studies of the subcontinent.' Sunday Times 'Ambitious, colourful and fascinating.' The Times 'It is hard to imagine anyone succeeding more gracefully in producing a balanced overview than John Keay has done in "India: A History"!a book that is as fluent and readable as it is up-to-date and impartial. Hardly a page passes without some fascinating nugget or surprising fact!one can only hope that John Keay's 'India' will be widely read, and its lessons taken to heart.' Guardian 'Certainly the most balanced and lucid history!his passion for India shines through and illuminates every page!puts Keay in the front rank of Indian historiographers.' Spectator

John Keay is the author of four acclaimed histories: 'The Honourable Company', 'Last Post', about the imperial disengagement of the Far East; the two-volume 'Explorers of the Western Himalayas' and 'India: A History'. His books on India include 'India Discovered', 'Into India' and 'The Great Arc: The Dramatic Tale of How India was Mapped and Everest was Named'. John Keay is married with four children, lives in Scotland and is co-editor with Julia Keay of the 'Collins Encyclopaedia of Scotland'.