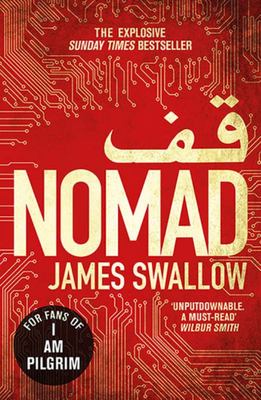 New York Times bestselling author James Swallow begins his espionage thriller series withNomad featuring British desk jockey intelligence operative turned active agent. Marc Dane is a MI6 field agent at home behind a computer screen, one step away from the action. But when a brutal attack on his team leaves Dane the only survivor--and with the shocking knowledge that there are traitors inside MI6--he's forced into the front line. Matters spiral out of control when the evidence points toward Dane as the perpetrator of the attack. Accused of betraying his country, he must race against time to clear his name. With nowhere to turn to for help and no one left to trust, Marc is forced to rely on the elusive Rubicon group and their operative Lucy Keyes. Ex US Army, Lucy also knows what it's like to be an outsider, and she's got the skills that Dane needs. A terrorist attack is coming, one bigger and more deadly than has ever been seen before. With the eyes of the security establishment elsewhere, only Keyes and Dane can stop the attack before it's too late.

Someone has betrayed your country and murdered your friends. You're the only suspect. And the only one who can stop them striking again ...

Right on the money, bang up to date, Nomad is a scorching romp for grown up boys. A killer of a thriller -- Jon Wise Weekend Sport Nomad is a debut spy thriller from a veteran science-fiction author who delivers his (...) enjoyable narrative at a frenzied pace, with plenty of narrow escapes for reluctant hero Dane -- Jon Coates Daily Express Ferociously paced thriller, a high-concept tale of the solitary hero on the run, bristling with technology and frequently erupting into lethal violence...the author's background in scriptwriting and videogames means that the tale is slick and sharply focused... -- Declan Burke The Irish Times Followers of Jason Bourne or those who are familiar with I Am Pilgrim and / or homeland will agree that this book is a rattling good yarn. Well written with plenty of cliffhangers and thoroughly enjoyable Woman's Way Exciting Thriller The Sun Nomad is a globe-trotting espionage thriller (...) and very enjoyable The Guardian (Review) Dane stands out as an unusual action hero... Breathless and thrilling, sharply plotted and almost painfully topical, it's a gripping story that does everything a spy thriller should. Track of Words Blog There's only one word to sum up Nomad and that word is Wow! Wow! and Wow! again. Swallow hits the page running and you never stop, from the panoramic opening scenes in Barcelona through to the military operation in Dunkirk and on through the rest of the novel The Crime Warp Book Blog This is edge of the seat stuff that is terrifyingly real in places and pushes the boundaries of reality in others, not unlike most high-action thrillers. If you're a fan of the novels of Lee Child, Frederik Forsyth and Chris Ryan or you can't wait for the new Bond film and love the TV series 24, then this is for you Closer magazine (Fred Olson Cruises magazine) Highly sophisticated and presented with incredible detail that it is highly credible...The narrative is very fluent and moves at speed, the reader immediately dragged into the action and despite the number of scenarios, locations, characters and events introduced rapidly in the opening chapters, Swallow's confident and clear style ensures it's accessible and easy to follow rather than overwhelming Bibliomaniac UK Book Blog Nomad is utterly gripping, cleverly plotted and one hell of a thriller. Highly Recommended Liz Loves Books Blog James Swallow describes a character who is likeable and who is just like Bond (...) It is a good story and the author gets you to keep turning the pages in order to know what happens next -- David Prever at Drivetime BBC Radio Oxford I think I've found my new favourite action adventure author and main character! (...)The writing and action is fast paced keeping you on the edge of your seat and barely letting you catch your breath before the next bit of excitement is upon you (...) An excellent book and a really enjoyable read, I'm already looking forward to the next book which will be out some time next year Nerdish Mum Book Blog A gripping finale. Highly recommended Breakaway Reviewers Swallow keeps the tension taut and the reader guessing until the end, all the while delivering a topical story. In Dane he has an appealing protagonist in what is sure to be a successful series -- Christopher Herde Courier Mail (Brisbane) A rattling good plot Herald Sun (Melbourne) A ripper of a thriller! 7AD New Zealand Radio Swallow is an experienced scriptwriter who has a fine eye for action scenes and knows how to keep his story moving quickly throughout its almost 500 pages... With its brisk plot, frequent cinematic action and constantly shifting viewpoint Nomad is sure to appeal to fans of Jason Bourne. Read it now before the inevitable movie arrives Sydney Morning Herald The climax, as Dane and Keyes fight to prevent an ingenious and deeply unpleasant attack from taking place right in the heart of New York, was one that became genuinely impossible to put down. Nomad is a fast-paced, tautly written thriller with an extremely engaging main character who can both think and shoot his way out of trouble Crime Review When I saw this was being compared to I Am Pilgrim I was a little bit dubious, but it actually is a really great book with a gripping plot and great characters. I can see this novel being a huge hit because it has everything a great crime thriller should. It does live up to the comparison with other great novels of its type and it will have readers gripped from page 1 Nudge Books - Second Opinion ' A BAFTA nominated video game writer, Swallow is well versed in crafting exciting, pacey and high-concept stories. Marc Dane is a clever and likeable hero and, like Jason Bourne before him, readers will be rooting for him all the way.' Culture Fly

James Swallow is an veteran author and scriptwriter with over 15 years of experience in fiction, television, radio, journalism, new media and video games. He is a three-time New York Times bestselling author of 38 novels with over 750,000 books currently in print, in nine different worldwide territories. He was nominated by the British Academy of Film and Television Arts (BAFTA) for his writing on the critically acclaimed DEUS EX: HUMAN REVOLUTION, 2013's blockbuster videogame with over 2.18 million copies sold.