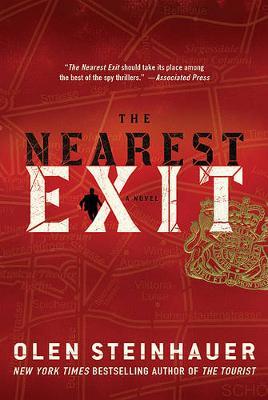 Faced with the potential dissolution of his marriage and the end of his quiet, settled life, reluctant spy Milo Weaver has no choice but to return to his old job as a "tourist" for the CIA. But before he can get back to the dirty work of espionage, he has to prove his worth to his new bosses. Armed with a stack of false identities, Milo heads back to Europe, and for nearly three months every assignment is executed perfectly. Then he's instructed to kill the fifteen-year-old daughter of Moldovan immigrants, and make the body disappear. No questions. For Milo, it's an impossible task, but ignoring his handlers is equally untenable. Suddenly he's in a dangerous position, caught between right and wrong, between powerful self-interested foes, between patriots and traitors--especially now that he has nothing left to lose.

Praise for "The Nearest Exit

""The "Nearest Exit" should take its place among the best of the spy thrillers."
--"Associated Press

"""The Nearest Exit", a terrific second installment in Olen Steinhauer's 'Tourist' spy series about Milo Weaver . . . [His] company is at least as valuable to the series' appeal as is his flair for international trickery."
--Janet Maslin, "The New York Times"

"[Steinhauer's] descriptions of European cities and their residents are full of life. But Weaver is the novel's gem. . . . In many ways, this is a classic spy novel, but it's Weaver's angst that lifts the book to a compelling level of freshness."
--"USA Today"

"Steinhauer delivers another winner in "The Nearest Exit", a spy novel that asks deeper questions about the price we extract from individuals in the pursuit of the so-called greater good."
--"Los Angeles Times"

""The Nearest Exit", Steinhauer's follow-up novel, reprises the themes of "The Tourist" with even more success. . . . Like le Carre's George Smiley, Weaver is a richly imagined creation with a scarred psyche and a complex backstory that elevates him above the status of run-of-the-mill world-weary spook."
--"The New York Times Book Review"

Olen Steinhauer is the author of the bestselling Milo Weaver series, including The Tourist, and a series of widely acclaimed Eastern European crime novels, which include The Bridge of Sighs, The Confession, 36 Yalta Boulevard, Liberation Movements, and Victory Square. He is a two-time Edgar Award finalist and has been shortlisted for the Anthony, the Macavity, the Ellis Peters Historical Dagger, and the Barry awards. Raised in Virginia, Steinhauer lives with his family in Budapest, Hungary.